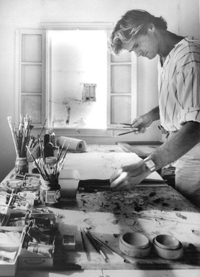 Born in the former Belgian Congo in 1950, Christian Peltenburg-Brechneff was educated in Switzerland, England and the United States of America. In 1975 he received his Master of Art Degree from the Royal College of Art in London. He has exhibited in Europe and the United States of America, and has won numerous awards, including the Swiss Federal Government Scholarship. "Three Oceans", his last one man show in New York in 2001, was with Salander-O'Reilly Galleries.

His paintings appear in public and private collections worldwide including the Metropolitan Museum of Art, the National Gallery of Greece, and the Orange Country Museum, Newport Beach, California.

Decoration by Allison Caccoma is proud to represent Christian Brechneff.  We are here to help you with any works from his collection.